The Ministry of Finance and Development Planning will hold a Budget Pitso for General Stakeholders on the 11th September 2015. The event will be held at Pavilion, Fairground Holdings, Gaborone. There will be another Pitso for Local Authorities at the same place on the 14th September 2015.

The Minister of Finance and Development Planning attends the SADC Ministerial Task Force on Regional Economic Integration and Council of Ministers meetings which will take place in Harare from the 6th - 7th March 2015. The main purpose of the Ministerial Task Force meeting will be to review progress on implementing the Summit decision regarding the development of a Strategy and Roadmap for Industrialisation of the SADC Region.

The gravity of the allegations contained in the articles entitled: “Botswana faces legislative crisis following Cabinet budget goof” by Sunday Standard Newspaper of 22-28 February 2015, and “Matambo faces MPs on bungle” in the Mmegi Newspaper of the 24th February 2015, which were followed by a Parliamentary Question No. 339 by Honourable Dr P. Butale, MP (Gaborone Central),  are not only intended to cast aspersions on the integrity of the Government of Botswana in general, and the Ministry, in particular but are also meant to misled the public.

With regard to the Savingram by the Permanent Secretary, Ministry of Local Government and Rural Development addressed to Town Clerks and Council Secretaries, a meeting was convened by the Speaker and attended by concerned parties including Hon. Dr. P. Butale to discuss the matter.

In that meeting, the Permanent Secretary explained that his Savingram was an internal communication in which he was advising Town Clerks and Council Secretaries of decisions that had been taken by the Government during the process of preparing the budget, and not after the budget had been submitted to Parliament as alleged in the newspaper reports. The explanation provided by the Permanent Secretary was appreciated by all present at the meeting.

Subsequently, Honourable Minister Matambo presented a statement to Parliament on the 25th February 2015 to reconfirm the fact that the said Savingram, despite its date of 9th February 2015, was an internal communication to provide feedback to Local Authorities on the budget preparation process, before the Draft 2015/16 Estimates of Expenditure from the Consolidated and Development Funds was finalized and laid before the National Assembly on the 7th January 2015, and the presentation of the Appropriation (2015/2016) Bill, No. 1 of 2015 to the National Assembly on the 2nd February 2015.

It is not the habit of the Ministry to respond to every newspaper article pertaining to its operations. As a matter of fact, the Ministry believes in the role of the media to inform and educate the public on financial and economic issues, as this contributes towards the delivery of its mandate. However, we are compelled to react this time because of the gravity of the misinformation in the newspaper reports. 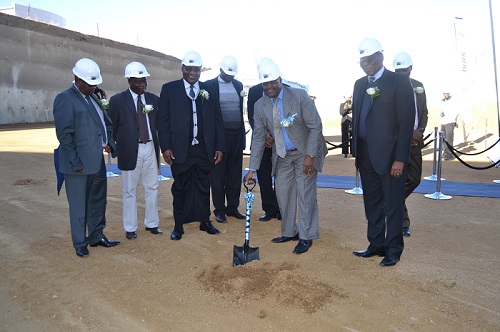 Hon Minister Matambo paid tribute to the Board and Management of BURS for having decided to construct a modern office complex comprising a 3 storey basement, an 8 storey corporate headquarters tower block, two 3 storey office blocks and a 3 storey ancillary block which will house a cafeteria, gymnasium and conference rooms.

Lorem Ipsum is simply dummy text of the printing and typesetting industry. Lorem Ipsum has been the industry's standard dummy text ever since the 1500s, when an unknown printer took a galley of type and scrambled it to make a type specimen book. It has survived not only five centuries, but also the leap into electronic typesetting, remaining essentially unchanged. It was popularised in the 1960s with the release of Letraset sheets containing Lorem Ipsum passages, and more recently with desktop publishing software like Aldus PageMaker including versions of Lorem Ipsum.