There is no one widely accepted definition of public-private partnerships. It may broadly be defined as "a long-term contract between a private party and a government entity, for providing a public asset or service, in which the private party bears significant risk and management responsibility, and remuneration is linked to performance". PPPs typically do not include service contracts or turnkey construction contracts, which are categorized as public procurement projects, or the privatization of government assets or companies where ownership is transferred to the private sector.

a)          Based on measurable output (and result) specifications;

b)         Governed by a payment mechanism that provides payment only on delivery of services at required standards;

c)           Accompanied by a transfer of financial and operational risks with consequential financial effects; and

Deriving from the above definition, the main features of public-private partnership are:

·      Long-term contract between Government and a private sector partner for the provision of services of public interest, based on new or improved assets;

·      The private sector partner is involved in all stages of the project - design, construction, financing, maintenance and / or operation of the facility;

·      Public institution defines requirements in terms of quality and level of service and not in terms of inputs;

·        The private sector partner provides all or the majority of the project's funding;

·        Equitable distribution of risks between the Government and the private sector partners on the basis of who can better deal with them;

Most countries face the challenge of how to meet the growing demand for new and better infrastructure services yet there is limited budget resources and competing priorities. In addition, even where funds have been budgeted for, capacity in the public sector to implement many projects at the same time remains a challenge. The public sector does not have the capacity to effectively utilize the funds allocated for projects.

Governments have now found that partnership with the private sector is an attractive alternative to increase and improve the supply of infrastructure services. The partners in a PPP, through a legally binding contract, agree to share responsibilities during the construction and/or operation and management of an infrastructure project. This partnership is built on the expertise of each partner and the appropriate allocation of:

PPPs transfer a major share of the risk associated with infrastructure development (such as the costs associated with overruns, schedule delays, unexpected maintenance, and/or latent defects in the assets) to the private sector. This is accomplished by engaging the private sector in a bundled contract for the life of the asset. This contract connects ongoing operations and/or maintenance payments to the quality of the original construction. This means that:

·       Governments do not pay for the asset until it is built and operational;

·       A substantial portion of the contract is paid out over the long term, and only if the asset is properly maintained and performs well; and

·    The lifetime cost of the asset is known upfront, meaning that Governments do not bear the burden for costs that arise unexpectedly during the contract period.

While they are not the right solution in every case, PPPs can provide many benefits when applied to the right projects.

·    In addition to supplementing limited public sector funding and capacities to meet the growing demand for infrastructure development,  there are several reasons for the collaboration between the public and the private sector in developing and providing infrastructure  services. Some of these benefits include—

·        Availability of additional resources to meet the growing needs of investment in other priority social services sectors such as health and  education;

·         Access to private sector expertise, financing and technology (both hardware and software);

·         Project delivered on time, to budget and with increased quality and level of service;

·        The Government knows exactly how much it will have to pay, and when. This is useful for financial planning.

The lack of Government budget is one of many factors that need to be taken into consideration when deciding to undertake a PPP project. Other factors include:

·  The costs of developing and procuring PPP projects are often high. The size of the project should therefore justify the cost of implementing the project using the PPP method;

·   The private sector will only enter into a PPP arrangement where the operating cash flows from the project are expected to offer a reasonable return on investment and to repay the debt plus the cost of financing. These costs have to be borne by either the customers (as tariffs) or Government in the form of subsidies;

·      The private sector will do what it is paid to do and no more than that – therefore incentives and performance requirements need to be clearly set out in the contract.

·       There is no unlimited risk bearing by the private sector. More risk means a more costly project;

·       Political and social impact of the project in terms of tariff increases, loss of jobs or impact on the  environment;

·    PPP projects may also impose many explicit and implicit liabilities on the Government. These  contingent liabilities have a significant  impact on the economy’s debt sustainability.

A project should not be considered for being implemented as a PPP project unless efficiency gains from improved project delivery, operation and management, and access to finance and technology can offset the above-mentioned additional costs

PPPs are attractive as an off-budget mechanism for infrastructure development because they;

·        Provide relief from the burden of the costs of design and construction;

·        Allow transfer of many project risks to the private sector;

·       Have a positive influence in foreign direct investment flows into the country.

By gradually exposing the public sector to increasing levels of private sector participation in delivery of public infrastructure, PPP has a vital role in private sector development, particularly in developing the local private sector through joint ventures with international firms.

·    Conventional procurement is based on input specification where the public sector institution decides on the asset it wants in order to deliver a service and takes full responsibility for all works related to the delivery of the service. On the other hand, the focus of a PPP project is not on delivering particular assets but on delivering specified services at defined output specifications;

·   Under conventional procurement, the public sector assumes all the design, construction and operating risks, whereas risk allocation between the partners is at the heart of any PPP contract. Both partners should clearly understand the various risks involved and agree to an allocation of risks between them;

·      A PPP contract generally has a much longer tenure than a conventional construction contract. Thus, managing the relationship between the private company and the public sector institution over the contract tenure is vital for the success of a PPP project;

·       In the case of PPP, all phases of a project (design, construction, and operations) are awarded to a single contractor. This allows scope for better, smarter solutions. In traditional procurement, each phase may be contracted out to a different party;

·     Under a PPP arrangement if the contractor does not deliver the outputs as agreed, the Government may withhold part of the payment.

There are many important economic, social, political, legal, and administrative aspects, which need to be carefully assessed before a decision is made to implement a project using the PPP method. PPPs have various limitations which should be taken into account. The major limitations include:

·       Not all projects are feasible (for various reasons: political, legal, commercial viability, etc.);

·   The private sector may not have interest in a project due to perceived high risks or may lack technical, financial or managerial capacity   to implement the project;

·     A PPP project may be more costly unless additional costs (due to higher transaction and financing costs) can be off-set through  efficiency gains;

·      Change in operation and management control of an infrastructure asset through a PPP may not be sufficient to improve its efficiency unless other necessary conditions, such as appropriate sector and market reforms, are met. Often, the success of PPPs depends on    regulatory efficiency;

·    PPP projects often have underlying fiscal costs and contingent liabilities of PPPs on the Government that may arise in the medium and long-term. These underlying fiscal costs and contingent liabilities on the Government should be given due consideration when a PPP project is considered.

A range of deficiencies in the capacity of both public and private sector could hinder the formation of a successful partnership. Major challenges include:

·   the reciprocal mistrust and lack of understanding of one another’s interests and needs across the public and private sectors;

·   the absence of locally available information on, and experience with, arranging sustainable partnerships; and

A typical PPP structure can be quite complex involving contractual arrangements between a number of parties, including the Government, project sponsor, project operator, financiers, suppliers, contractors, engineers, third parties (such as an escrow agent ), and customers.

Figure 1 below shows a simplified PPP structure. The actual structure of a PPP, however, depends on the type of partnership model and can be quite complex involving contractual arrangements between a number of parties including the Government, project sponsor, project operator, financiers, suppliers, contractors, engineers, third parties (for example, an escrow agent), and customers. 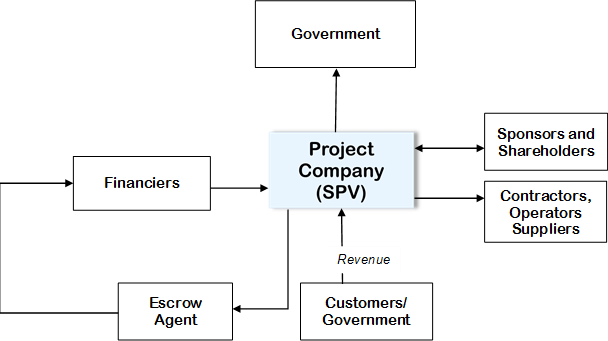 The creation of a separate business entity called a Special Purpose/Project Vehicle (SPV) is a key feature of PPP. The SPV is the legal entity that undertakes the PPP project and negotiates contract agreements with other parties including the Government.

An SPV is set up by the consortium of private sector investors (the successful bidders), who in exchange for shares representing ownership in the SPV, contribute the equity capital, and agree to implement the project. An important characteristic of an SPV as a company is that it cannot undertake any business that is not part of the project. An SPV is a separate legal entity from the consortium, but protects the interests of both the lenders and the investors

Sometimes, Government may want to ensure a continued interest (with or without controlling authority) in the management and operations of PPP projects that are of strategic importance, or in projects that require significant financial contribution from the Government. In such a case, a joint venture may be established. The SPV is then established as a joint venture company between the public and private sector investors where Government acquires equal rights and equivalent interests to the assets within the SPV like other private sector shareholders.

Other than for strategic, financial and economic interest, the Government may also like to directly participate in a PPP project. The main reasons for such direct involvement may be to:

However, Government participation in the SPV may lead to conflict of interest and regulatory capture. Government may not have the moral high ground to enforce its regulatory responsibility.